By Kate Burton, Sixth Grade Science Teacher
Kind of like that tickle in the back of your throat that signals that you might be coming down with something, I’m not sure when the idea for having a classroom creed infected my brain. It likely began sometime last school year when the teachers were working on the School’s SAIS Self-Study. With all of the work we were doing to collaboratively describe what it is we do here at Trinity School, I started thinking about what it is I do in my classroom. Now, by looking at the byline for this piece, or by asking someone around the school, you might decide, “She’s a science teacher. I bet she does labs.” And yes, I “do” labs. I also “do” note-taking and questioning and lecturing and reflecting and problem solving. However, that really doesn’t cover all that I want to do and all that I promise myself I will do for my students.
Much like the annoying cough that you grapple with once you’ve succumbed to the cold you were fighting, I don’t remember the first time I watched Simon Sinek’s TEDx Talk on how great leaders inspire action (which is totally worth the investment of 18 minutes). I’m sure I saw it before our self-study work, and we probably also watched it as a faculty during our work. Since then, it seems I can’t escape running into his Tedx Talk: a professor at Kennesaw State University would mention it, or it would be referenced on Twitter. Basically, everywhere I turned, I was being presented with Simon’s golden circle. And that forced me to think about how knowing my “why” influences the “how” and the “what” of what I “do” in my classroom.
So, in the same way we might start dosing ourselves with extra servings of orange juice, I started tinkering with what would become my classroom creed. Of course, I wanted to state clearly that knowledge was important in my classroom, but I also wanted to include that just having knowledge was not as important as being able to work with knowledge and work towards knowledge. In my creed, I wanted to include something that would address how I would model, and expect students to mirror, how we would all behave around learning and the knowledge we were gaining. It was important to include something about what success looks like. And I wanted to include a directive for me, and some reassurance for those who might struggle, about how knowledge will be gained.
Scrawled within a composition notebook that holds notes from a quantitative research class I took in the summer of 2015 and drafts of a few “welcome to our class” letters, there is a page that lists the following: knowledge- shared, built, dive deeper; passionate learners; success – more than one kind; and buttressing learning toward success. Occasionally, the composition notebook would fall open, and I would look at my list and make some tweaks, but nothing ever happened with it. Like admitting I actually have a cold, I knew I was avoiding the completion of my thoughts on a classroom creed because I wasn’t sure I was going to like putting it in print. What if I had it posted and someone questioned whether I was doing these lofty things?
And then, just recently, I came across a quote from feminist, civil rights activist, and poet Audre Lorde that spurred me to complete my creed. Lorde said, “When I dare to be powerful, to use my strength in the service of my vision, then it becomes less and less important whether I am afraid.”
I had a vision of why, and how, and what I wanted my classroom to be; I trusted in my strength to be the kind of classroom leader my students deserve; and I wanted to be powerful rather than afraid, so I went to work and set something down on paper.
If you find yourself downstairs near the science lab, stop in, and check me on it. Honestly, I’m hoping that you will be infected by the “creed bug,” too. We can start our own creed movement! Because in taking a stance on what we do, we begin “treatment,” and we move ourselves closer to all we hope to be. And in Room 1005, our creed is to strive to share, recycle, construct and deconstruct knowledge; have passion about knowledge and learning be unmistakable; celebrate multiple forms of excellence; and build bridges to move learners closer to knowledge. 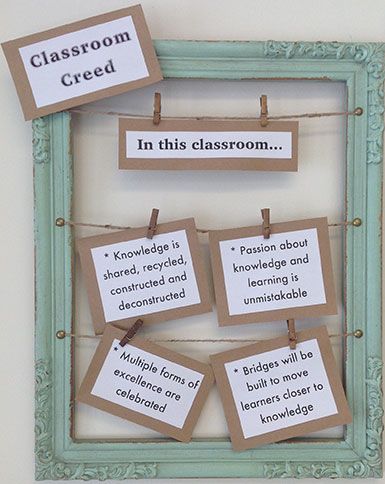